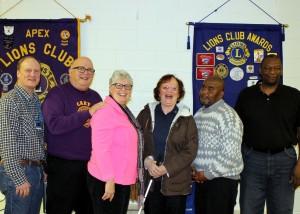 Why do people become Lions?  And, what exactly do Lions do?  Those are some questions that we have probably wondered ourselves at one time or have heard when someone found out that we were a member of a Lions club.

We had a very interesting and inspiring meeting this evening and the subjects of the speakers came together in ways that we could not have anticipated.

Some of our Lions were talking during a rare slow time at the NC State Fair and discussed the idea of presenting some of their stories about why they became Lions and what being a Lion meant to them. At the same time, we had been contacted from a Lion from another club in our zone about a V.I.P. Support group who had some needs. V.I.P. is an abbreviation we use for Visually Impaired People, if you did not know.

Lion Ed Burt from the Cary Lions Club introduced our first speaker this evening. Lion Ed is a Guiding Lion and he along with his wife Becky work with a V.I.P. Support group in the Western Wake County.  This group was started back in March of 2007 by Lion Joanne Heron who was at that time the president of the Holly Spring Lions Club. She had assistance from Lions Ken Bucher and Penny Williams from the Apex Lions Club and Lion Ed Burt from Cary to name a few.  The Holly Springs club had been the sponsor for this V.I.P. Support group but with the closing of that club they have now effectively been orphaned. 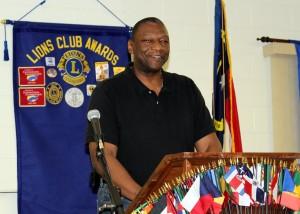 Robert Williams is the president of the V.I.P. Support group and he came to us requesting help.  At one time Robert worked full time and drove himself to work.  But his eyesight deteriorated over the years to the point where he had an accident because he was simply unable to see well enough to drive safely any more.  He got involved with the V.I.P. Support Group and Guiding Lion Ed Burt and eventually became the president of the group.

On behalf of the V.I.P. Support Group Robert had three specific requests for the Apex Lions Club:

We will discuss how the Apex Lions Club can assist this group a the next board meeting. In the mean time, if anyone feels lead to provide direct assistance, please contact Robert Williams by email at ecu4ever86@gmail.com or Lion Ed Burt by email at eburt@nc.rr.com. 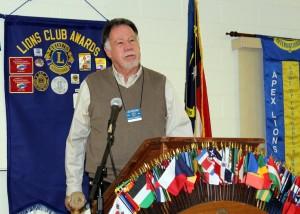 Afterwards, a couple of our Apex Lions gave presentations about why they became Lions and what being a Lion means to them. First up was Lion John Potts who shared comments about joining the Lions in SC and how one of his first assignments was to raise funds for a little girl to have cornea transplant surgery. That went very well and she had the surgery and afterwards, Lion John got the opportunity to go fishing with her. Ever since, he has felt very strongly about helping children. He attributes his becoming a Lion to someone having asked him. But he stays involved because he has seen, first hand, how Lions change lives and do good things to help those who are less fortunate and in need.

Apex Lion Carl Cromwell followed with his own story. Lion Carl put it this way: “We all become a Lion because someone told us about Lions and what Lions do and then asked us to join. But we really do not know what Lionism is until we get involved for ourselves.

I became a Lion in 1974 when the chairman of the board of directors of a corporation I was manager whom also was the President of the local Lions Club asked me to join. I did join and some of the first activities I was involved with were selling brooms and soliciting money for white cane at road intersections. We also picked up used eyeglasses, but it was not until I got involved that I saw how the Lions Club had so much of an impact on two of my uncles that were blind, whom I considered my heroes. One was born blind and the other could see light until about 8. They both went to the Tennessee School for the Blind in Nashville where they were taught to read and write in braille and also how to play musical instruments. They played the piano, guitar, fiddle (violin) and various horn instruments. After finishing school they could not earn a living back in their rural home county so the School for the Blind helped them find jobs in a broom factory in Nashville. They sewed the fibers together on the broom. They lived independent lives, worked at the broom factory, gave music lessons and even performed on WSM radio which broadcast The Grand Ole Opry. They lived happy lives.
They never considered themselves handicapped, never took welfare, all they needed was a little assistance in special type of school and support for and training in a job. The Lions Clubs assisted them by supporting the TN School for the Blind and also by buying and selling the brooms that they helped make.

A Lions banner we use in the fair booth states, LIONS, Loving Individuals Offering Needed Service. That is what Lions are all about with a special emphasis on sight and hearing impairment and also into other area community involvement.

I asked the Lions members to listen to some of my uncles music and to close their eyes, think about learning to read and write, sew brooms and make music AND to also think of ways we as Lions can offer needed service or assistance.

I was reminded of something my parents told me as a child.  “You only get out of it what you put into it.”  So I encourage you to find some way to serve in the Lions Club.  The more time, energy, effort, passion and love you put into your service, the more you will be blessed by it in return.  Our meeting this evening reminded us of what Lions are all about and provided us with yet another opportunity to help those in need. It was inspiring!