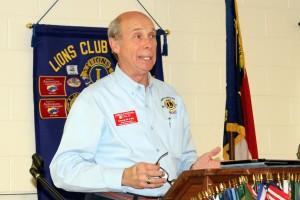 This evenings special guest speaker was Lion George Culp. Lion George brought his wife Diane with him on the two hour trip from Concord to speak to us. He has been a Lion since 1970 and is currently serving in several key roles in Lionism. He is the Brighter Visions Chair for District 31E and he thanked us for our generous contribution to the campaign. He is also the state Information Technology Chair which is what he came to speak to us about. He has been a Tail Twister at the club, district and state levels and is expected to become the 2nd VDG for District 31I in July. Outside of Lionism, he is the controller (like a CFO) of a small software company and Diane is a retired teacher who works “part time” now tutoring 5 days a week.

In his role as NC Lions Information Technology Chair, Lion George has several responsibilities including assisting the new districts get their web sites up and running. He worked with Apex Lions Club President John Lynde on that project. There was a small committee with representation from all districts formed to accomplish that task. All but one district participated and as a result the district web sites for all but one – and the Multiple District site – will have a consistent look and feel. Additionally, the committee members can continue to assist each other with updates and enhancements going forward as well.

Another role he has is Public Relations and Education for the state level. That part of his role includes our magazine, “The Advocate” which is mailed in printed form to all Lions in North Carolina as well as available in digital form online. Lion George spent the majority of his time telling us about some of the articles and interesting stories that can be found in The Advocate. He shared a story of an elderly lady named Elsa who he heard about who went tubing at Camp Dogwood when she was 100 years old. He got the opportunity to meet her and learn some very interesting things about her. She told him that she played the Harp and that she had even played it at the White House – for President Franklin Delano Roosevelt! He also shared a story of a lady named Stacy who lived in Greensboro. Stacy had been picked on as a child by the other kids at school because her eyesight was so bad and she had to wear very thick glasses. The head cheerleader even dressed up as her as a joke for Halloween one year. As an adult, with the help of Lions, she received a cornea transplant and was able to see much better. The Advocate ran her story and her photograph made the front page of the magazine. She wrote to Lion George to tell him how proud she was of the fact that she went from being teased because of her glasses to making the front cover of a magazine!

He also explained that not only should we read the magazine to be encouraged about what Lions are doing all around the world, but we should also consider creative ways to recycle the magazine so that others can learn about Lionism as well. The magazine is written in such a way that anyone can pick it up and learn about many of the good things Lions do – it is really a great big advertisement. So when you are finished reading your next copy, consider taking it to your next doctor visit and leaving it in the magazine rack there. Or maybe take it to a library or a church or even a college campus. We should use every opportunity we can think of to get the word out so people will know about us!  Lion George is truly an advocate!