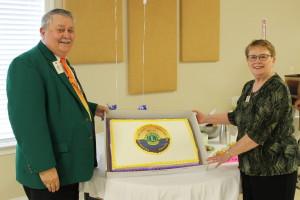 It was a bitter sweet Awards Banquet this year. For the first time since 1959 it was not an Awards “and Installation” Banquet because the district is finished this year. Next year, with the new redistricting, most of District 31G will go to District 31S and some will go to Districts 31O and 31N. Another one of the affects of the redistricting was that the banquet had to be held earlier in the year than normal. That, along with it being Fathers Day weekend and the fact that many Lions were already headed to Hawaii for the convention (or were already there) caused the attendance to be relatively low. But we still had a wonderful dinner provided by the Lions of the Pilot Lions Club and we took the time to recognize some of the achievements of the past (and last) year. 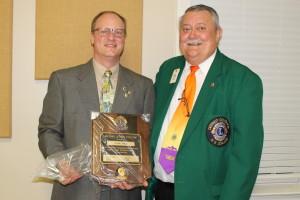 And some of our Apex Lions were recognized with awards. Lion PDG Wayne Faber got a certificate for his service as a Region Chair and V.I.P Fishing Tournament Chair. Lion Nick Somma got a plaque for being a 100% Secretary again. And Lion John Lynde got a certificate for his service as a Zone Chair and received the Bulletin Award and a Melvin Jones Fellowship. We need to wait until after July 1st to file for the Club Excellence Award. But we earned that one as well.  Way to go Apex Lions Club!

We also had some time for the PDGs and other guests who were there to reminisce about some fun times they have had along the way. During the course of the evening, the weather went from sunny and hot, to drizzle, to downpour of rain, to sunny and hot again almost mirroring the emotional roller coaster of the banquet itself. We ended the evening with a spirited presentation from the new District 31S Governor Elect Mary Boehm. She vows to put a priority on membership and bring energy to the new District S (“The Super District” as she calls it) to get things started off right! It seems that we are in for a great start! The Lions who are moving to District 31S (including the Apex Lions Club) should all be looking forward to a great first year for District 31S!