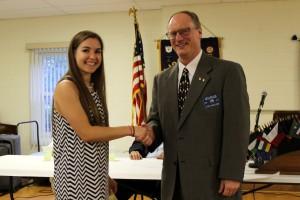 What an exciting night we had!  The first order of business was to present this year’s scholarship recipient with her check for $1500.  Coral Kazaroff, as student at Apex High School, finished 3rd in her class academically, but is a tremendously well-rounded individual.  She also played Volleyball on the varsity team and has quite a resume of community service activity as well.  Coral will be attending the University of Virgina next year for a degree in Chemical Engineering with an emphasis in Biomedical Engineering.  She will have a scholarship from the University of Virginia for her last three years but needs to pay her way through the first one. 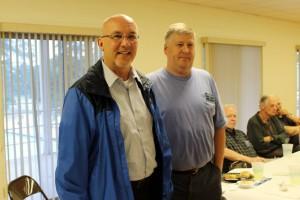 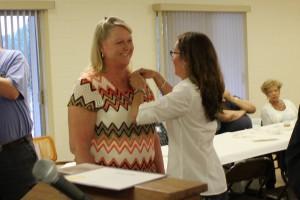 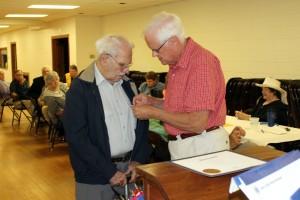 Next we had the pleasure of installing not one, not two, but three new members!  Tim and Donna Campbell were both sponsored by Lion Doug Brann.  They are long time friends through work.  Tim and Donna have been involved for several months, but have also had some medical issues to deal with so we had to wait to get them installed.  But now it’s official!  Don “D.R.” Young was sponsored by Lion Jim Witeck.   D.R. is a retired professional who worked in the optical business for many years with Baush & Lomb.  He lost his wife a while back to cancer and has been coming to meetings with Lion Jim for a couple of months now.  He enjoys our company and decided it was time to join us.  We are happy to welcome our three newest Lions this evening. 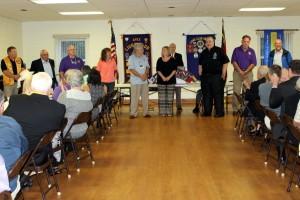 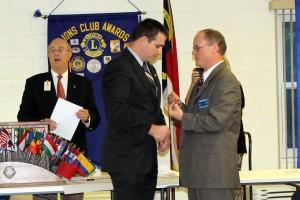 Finally, we installed our new President for the 2015-2016 club year, Lion Chris Norcross.  Lion Andy Lilliston (pictured behind the podium here) performed all of these installations for us.  We thank him for his service to our club!  After installing Lion Chris as the new President, Lion John Lynde shared some thoughts from the past year.  He listed out many (but not all) of the achievements of the club.  Most of the business of the club is done in committees or by the board so it is not necessarily visible even to the club members.  To sit and listen to the amount of service and many ways that the small group of approximately 50 people in the Apex Lions Club served in just one year was pretty stunning! 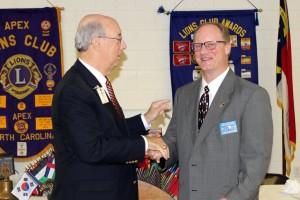 At the end, Lion John announced that Lion Nick Somma was once again eligible for 100% Secretary and that he entire club was eligible for the Club Excellence Award.  This is a very important award to strive for because it shows that the club is focused on the right things, is effectively service the community and is growing – all very important traits!  Lion Andy then presented Lion John Lynde with the Past President pin.

Lion John Lynde met with new President Lion Chris Norcross for several hours to help him plan the upcoming year.  Lion Chris asked all the right questions, had great ideas and his heart is certainly in the right place.  Once again this next year for the Apex Lions Club could be “Even Better”.  Let’s all make sure that happens!