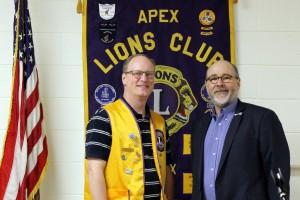 Our special guest speaker at our meeting on May 21st was “Toby” Holleman.  Toby and his brother Warren are co-authors of a book about the history of the Town of Apex called Pluck, Perseverance and Paint.  Toby was introduced by his childhood friend, and member of our club, Lion Hamilton Martin.  The book’s title is drawn from Apex’s first motto, describing the virtues of her early citizens and the tools required to turn a swampy “Log Pond” into a bustling community.  It was quite interesting to hear Toby debunk the common reason given for the name Apex and speak about the real reason for the name.  He also shared a lot about the history of how things changed around town as time went on in the early days.  Specifically, he spoke about how the fire affected the town, how the churches changed and moved and even some about how the distilleries affected the town many years ago.

Pluck, Perseverance and Paint covers not only early Apex, but all of western Wake County prior to World War II. The new edition presents both written and oral histories of the Apex area on such topics as slavery, the Civil War, Reconstruction, the Roaring Twenties, and the Great Depression. While learning about the history of Apex, readers will also learn about the history of central North Carolina, the South, and the entire United States during this formative period of our nation’s history. And because the book is written with both intelligence and wit, the reader will be entertained as well. 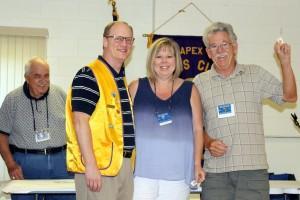 We also celebrated members of our club who received membership awards.  Lion John Lynde, Lion Joe’l Lynde and Lion Horace Johnson all received awards for having sponsored several members in the past year.  Lion Horace had the most which is why it is probably a good thing he is the membership chair for our club!  It goes without saying that membership is a critical part of any organization and recruiting new members may not be the easiest thing to do, but it certainly is one of the most important!

Toby Holleman also brought along some items to show us.  Toby’s father, Carl Holleman, was a long time member of the Apex Lions club himself and Toby had some of the awards that his father had collected over the years.  Here are some pictures of those: 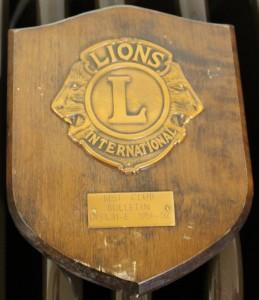 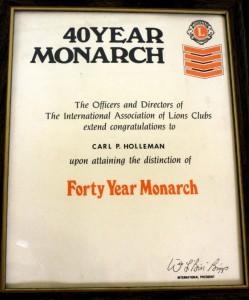