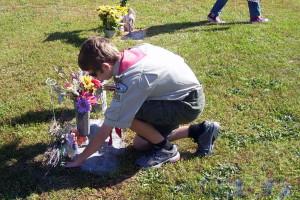 A scout places a flag at a veterans gravesite

Some years back an Eagle Scout, Zack Hinnis, from Troop 209 chose to identify Veterans buried in the Apex Cemetery on Church Street as his Eagle Project. Little did Scout Zack know that he was establishing what would become an annual Tradition for the Troop. After the Scout completed the project, American Legion Post 124 took the lead in seeing that flags were placed on every identified veteran in the cemetery. The Post provides the Flags and the Troop assembles on the Saturday before Memorial Day to set the flags and recognize the men and women who served our country. This is a tradition that takes place all across the United States in large towns and small ones. 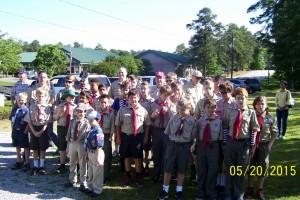 On Saturday morning May 23 at 9 am 25 Scouts from Troop 209, Cubs from Pack 312, along with parents, leaders, other patriots and members of Apex American Legion Post, totaling over 50 strong, gathered to honor those who gave so much for our nation. The Troop leader led the group in the Pledge of Allegiance to our Flag. The Post Commander addressed those assembled and gave a brief history of the now annual tradition. Maps were given to the flag placement teams as they set out to dress the graves of our heroes.

There are over 200 identified veterans in the cemetery. The oldest known veteran is Charles Dearen who served in WW 1. He was born 1888 and died in France in 1918. He is buried in the old section of the cemetery next to his Father and Mother. Someone in his family put up large head stones and his site was easy to located. There are other WW ! veterans in the cemetery but as of this date their graves have not been identified. More work to be done on this. I plan to put some effort into locating these sites. However there are many sites that do not have identifiable marking due to age and the type of markers that were available in the late 1800 and early 1900.

Next year my hope is that Apex, as Lions and as a community, will step out and make this a great assembly for what should be the most important action we can take to honor our hero’s past. Who knows maybe one day we will even have a parade to mark the event.