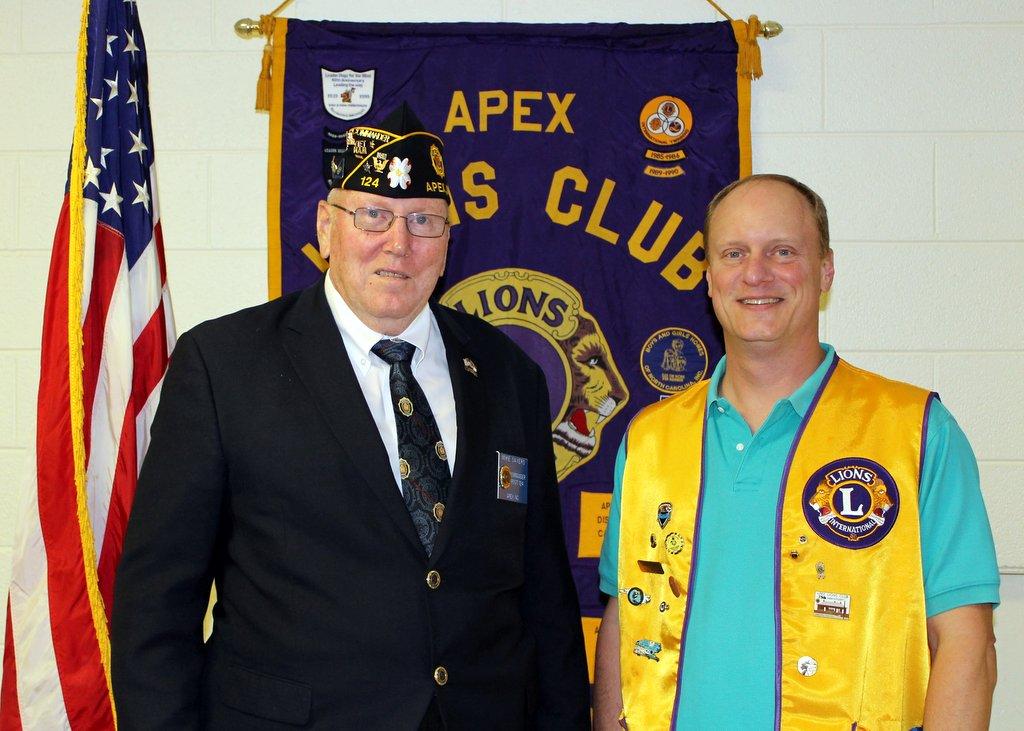 Several months ago the Apex Lions learned about a local veteran who was having serious financial issues and had a roof that needed to be replaced badly. So we decided to help him and
contacted American Legion Post 124. Working together, we replaced the roof at no cost to that veteran in need.  Pictured above are Commander Mike Sayers and Lion John Lynde.

We invited American Legion Post 124 Commander Mike Sayers to speak to the Apex Lions so we could learn a little bit more about what the American Legion does and what community services they provide. Commander Sayers served in the Navy from 1959-1964, then was a fire chief and is currently a member of the Apex Rotary and Kiwanis clubs.

The American Legion was started in March of 1919 in France about the time when the World War I veterans were coming home.  The organization was formed to help these veterans when the war was over. The first convention was held in Minneapolis, MN. The Apex Post was chartered not long after in 1920 and now has about 150 members.

The American Legion still advocates for Veterans care and funding. They specialize helping Veterans with special needs and also those looking for work after military service. They promote strong national security and partner with other nations on matters of Foreign Relations. The group is active with Operation Coming Home initiatives.

Since 1920, the American Legion has partnered with the Boy Scouts of America. In Apex, they work with six different boy scout troops. They also work with children who have disabilities and assist a student trooper program. They sponsor youth to train with the State Troopers for a week.

The Apex Town hall will host the American Legion children’s oratorical competition this year which offers $22,500 in prizes.

Since 2010, on the 1st Saturday of every month in downtown Apex at the fire station, the American Legion has a flag ceremony and rings the bell for each Veteran who lost their life the previous month.

Commander Mike can be reached at msayers1@att.net