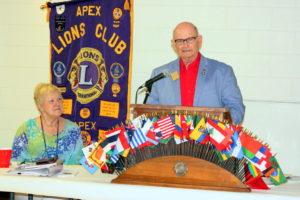 This evening we were visited by Past District Governor, Herb Justice.  He came from his club in North Raleigh to provide us with an update on the business of our state organization North Carolina Lions, Incorporated.

His presentation started with some funny remarks about what life was like in the 1950s.  Then he provided a steady stream of facts and updates which included such things as: