We had the privilege to install two new members into the club this evening.  Past District Governor (PDG) Lion Gene English from the Garner Lions Club performed the installation ceremony.  Lion Horace Johnson sponsored new Lion David Delehanty and Lion Hamilton Martin sponsored new Lion Don Grimes.  They are pictured in that order below. 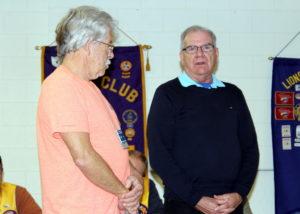 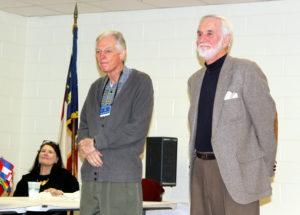 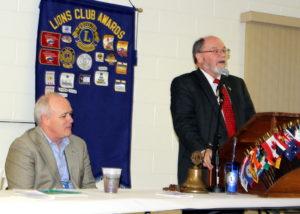 Afterwards Lion Gene English presented a program on Brighter Visions as he is the Brighter Visions chair for District 31S.  Brighter Visions is a program that was formerly known as White Cane because it was born out of the need to provide white canes to aid the blind.  Even today the program provides more than 500 white canes per year but it does much more than just that now.  Some of these services include the VIP Fishing Tournament, matching grants for things like SPOT Vision Screening devices and even a radio reading program to provide a service for the blind.

In District 31S we have about 30 committees and about 60 clubs between Apex and Manteo which is a very large geographical area for a district.  This presents some challenges for district chairs to travel great distances to give their programs.  Each year we learn better ways to deal with these issues, though.  Region and Zone Chairs are working together to be able to have surrogate speakers to assist the district chairs with programs in far reaches of the district.

We also had a reminder from Lion Horace that our Fish Fry is exactly 60 days away.  We will be having a board meeting next week and will need to decide on a beneficiary soon so we can get started printing tickets.  The Fish Fry is a great Apex tradition and we hope to see you all there on March 17th.