Good news!  We are growing again!  In recent weeks and months we have had several Lions transfer into or join our club in Apex.  We did not have a speaker for the meeting this evening so we invited the three newest members to take a moment and introduce themselves to the club.  The first was Don Grimes.  Don grew up in Cary and has known some of our members for most of his life.  He recently retired as an attorney and has some time to give back now.  Next up was David Delehanty.  David is originally from upstate New York but has lived all up and down the east coast working in the mental health industry.  He retired and moved to Apex to be near family.  Finally, we met Rich Engates.  Rich is transferring his membership from his previous club in Alabama where he is an officer and has been a Club President and a Zone Chair before.  Rich is also originally from up state New York but recently moved to Apex for work (engineering) and is having a house built on a lot he purchased in Apex.  He is excited to be a member in the Apex Lions Club.  We are thrilled to have all three join us and look forward to a great 2017 in Apex. 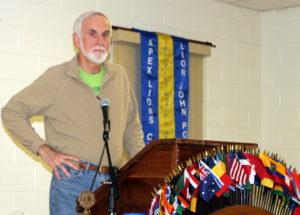 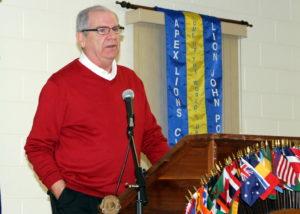 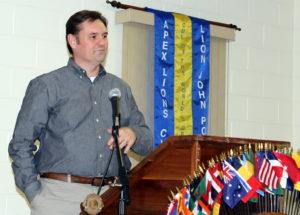