On Saturday, May 9th, some of the Apex Lions volunteered at the Habitat For Humanity project in Apex. There were a total of 11 people associated with the club there. Nine of us were members and two were family and friends. We parked at the Sovereign Grace church parking lot just off Hwy 55 near the EMS building. Then we walked about 4 blocks to get to the site. There were 4 buildings in progress that day. One was almost finished, two were framed and roofed and needed mostly soffit work done. The fourth was just being framed and sheathing was being installed on the lower sections. We were asked to spilt up into teams. Some went to the first house and got to do inside work like painting. The rest of us were split up into several teams to do soffit work on the various parts of the second and third homes. We were up on scaffolding, ladders and even the roof working pretty much all day until 3 pm. The morning was a bit cloudy but it got sunny and hot in the afternoon. I think most of us were pretty tired by the time the day was over. The Lions who participated (in alphabetical order) were:

Here are a few pictures from the work day: 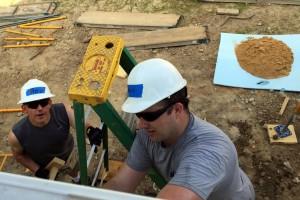 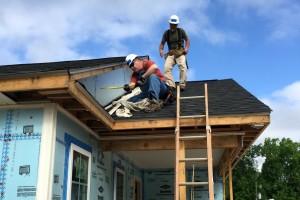 Lion Doug Brann on the roof 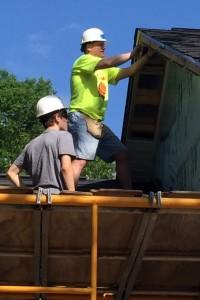 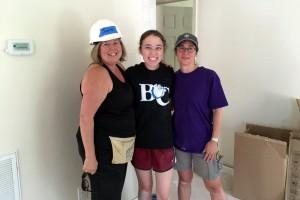