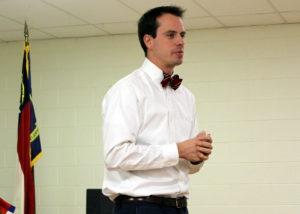 As is our tradition at the Apex Lions Club we invited a pastor to speak at our last meeting of the year. We have done this for many years and enjoy hearing a Christmas message to end one calendar year and begin the next. This evenings guest speaker was Reverend Owen Barrow, Lead Pastor at 519 Church. Owen is a native of Raleigh but now lives in Apex with his wife Chambliss and their two children.

The message he brought to us this evening was centered around the notion of Advent. The word itself means “arrival”. But not just any arrival, a really big and meaningful arrival. Some might call it a “game changer”. It also carries the notion of a period of time when this change is taking place or when the movement is in progress. He began with painting a picture of the advent of the television age. When televisions became affordable and programming became available there was a period of time when life changed quite a bit. The way we got information changed, the speed at which that information could be delivered changed many things as well and, of course, there is the whole notion of being entertained. The word advent applies here because the impact of the introduction of the television to the masses was substantial.

This word advent is also used to describe the time that leads up to Christmas. The celebration of Christmas – of God sending his one and only son into the world to become our savior – is the epitome of the meaning of the word advent. There was a monk who claimed that there were actually three advents created by God. The first is Christmas itself. The second will be Jesus triumphant return. The third is the change that takes place in our hearts every day. That got him to ponder what would it mean if Jesus truly caused advent in his heart every day? What would change and what would that look like?

The advent season prior to Christmas has four themes: Hope, Love, Joy and Peace. The first three are in our control. We can choose to have Hope rather than to worry, to Love and not fear, to be joyful and not despair. Peace would be the result of successfully accomplishing the first three. So we were left to consider: Are we doing the work necessary to Hope, Love and be Joyful? Is that resulting in Peace? Isn’t that what the third advent would look like?