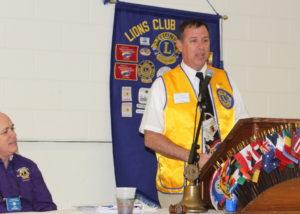 Lion Gary Greene from Aberdeen was our guest speaker this evening. Lion Larry also happens to be the Director of Civic Club Development for the Boys & Girls Homes of North Carolina. Several of us met Lion Larry in Greenville at the Mid-Winter Convention when we had the opportunity to present him with the donated cans of food and the check for $250 to buy even more.
First, he shared some fun stories about being a Lion. At the Mid-Winter Convention, he accidentally yawned and stretched during the Tail Twister Auction at breakfast. He was seen by the auctioneer, and the bid was entered and won for a new set of tools. Those will probably come in handy some day!
Then he shared some very touching stories of some of the boys and girls that have been students at the Boys & Girls Homes of North Carolina. Most of the children there are taken out of their homes by social services because of abuse or neglect. And often times it is because the offenses are so serious that their lives are deemed to be at risk. There are currently 54 students in the 9 homes at Lake Waccamaw, NC.
The first person we heard about was Emir. When he came to B&GH he had very poor people skills and could barely look people in the eye. But now he has graduated High School (no small feat for a person in his situation) and has gone on to be a long-distance truck driver which is what he always wanted to do.
When Jocelyn started at age 16 she had already been through 36 previous placements and had not worked out anywhere else. But she was very smart and by the time she graduated High School she had the lead part in the school musical. She went on to NC A&T to get her degree in social work and is now working on her masters degree at NC Central.
Finally, we heard about a 17 year old girl from Nigeria. The first Christmas she was there, after the Christmas party, she thanked everyone because that was the first time she had ever received a Christmas present (can you even imagine that). She had been raised in a place where females are treated like property and she had been loaned out to men most of her childhood. But now, she is a student at UNC Pembroke studying to get a degree in corporate law and she plans to return to Nigeria to fight for the girls there.
Boys & Girls Home of North Carolina was started in 1954 by A.D. Peakcock. He was an undertaker. He found a desperate family struggling to survive when he took the body of a mother who had died to the family she left behind. There were seven children who were cold, hungry and penniless with no father or other family to care for them. So A.D. went to the local civic clubs and Boys & Girls Homes was started. Since then more than 5,000 children have benefited from that effort.
The last story Lion Larry shared was the one that meant the most to him personally. He described it as the moment that Boys & Girls Home went from something he supported to a personal mission. A young man who struggled with people skills and lacked confidence when he arrived was giving a speech when he was about to graduate. The speech was well done and he was very confident. When he was finished and the time for questions and answers came someone asked him what he liked best about Boys & Girls Homes. It was then, for the first time, that he looked down and grippe the podium as he prepared his answer. It was simple and profound: He said that he got three meals a day and his own bed to sleep in.
We can all be very proud of our level of support for the Boys & Girls Home over the years. North Carolina Lions have been supporters since the very beginning and we continue to this day. We built the second cottage at Lake Waccamaw and help support it even now.  For example, this year at the Mid-Winter Conventions across the state of North Carolina, Lions donated 2330 lbs of food (11oo of which came from District N&S).  In addition to that, a portion of our district goals is appropriated and many clubs (like Apex) give above and beyond.  This is just one of the many ways that Lions make a real difference in the world and in people’s lives every day!

At the end of the meeting we donated all of the money from our 50/50 as well.