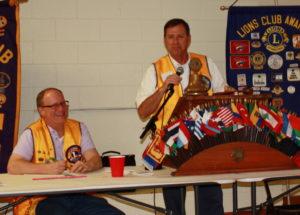 You may not know this but Lions all over North Carolina support the Boys & Girls Homes of North Carolina. Some portion of every members dues goes to support this wonderful organization. And many clubs and individuals give above and beyond that because of the impact that this organization can have in people’s lives. This evening we had Lion Gary Greene from the Boys & Girls Homes of North Carolina at Lake Waccamaw as our special guest speaker.
Boys & Girls Homes is actually a charter school as well which means that it is also open to the public. This is good for the residents of Boys & Girls Homes because it offers them the opportunity to be in an environment with other people from the surrounding community. This year nine of the nineteen graduating seniors are from the Boys & Girls Homes. The charter school has also enjoyed a 100% graduation rate for some time. They work very hard to get their students “caught up” on the curriculum and get their diplomas.
He also shared some stories about specific students and the success they have had their. For example, Roberto is a graduating senior at 19 years old. He has an interest in becoming a welder and plans to attend Cape Fear Community College in the fall for vocational school in welding. He understands that he can make a very respectable living as a welder. He is also a welding artist and is known to make cats by welding horseshoes together.
Another resident, Christian, also living in the Lions Cottage has been there for about three and a half years. He is stocky and strong and is very interested in becoming a fireman. He has already become a junior member of the Lake Waccamaw Fire Department and was named Junior Fireman Of The Year last year. He plans to attend Fire training school in Wilmington in the fall.
Lion Gary also shared a lot of information about the motorcycle rally they had this past year. This is an annual event which consists mostly of American Legion riders but this past year had an unusually large turnout due to the return of an organizer who rejoined after the passing of his wife after her battle with cancer ended. There was an especially heartwarming story about one of the residents, a girl named Macy, who was there. She was given some raffle tickets from a husband and wife couple of motorcyclists. When the two winning raffle ticket numbers were called Macy had them both. One from the husband and one from the wife! So she won a nice amount of money to put towards her college next year. She will be studying Forensic Science at Western Carolina.
Currently they have about 54 kids living on the campus and just under 200 kids in foster homes across North Carolina primarily between Durham and the coast.
Thanks to North Carolina Lions (including some extra from the Apex club) the Lions Cottage was recently furnished with some heavy duty furniture which is needed whenever you have a bunch of teenagers living together!
Lion Gary invited us to come meet the Boys & Girls sometime and check out the Lions Cottage which is where the best behaved get to live. We just might need to do that sometime.