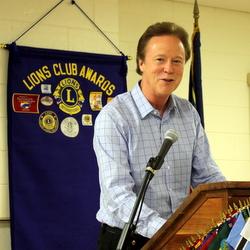 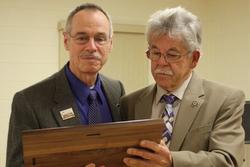 On Thursday, November 21, we had our annual banquet.  The banquet is a special meeting we have once a year to celebrate our club anniversary, have special guests, thank the folks who have volunteered and helped us the past year and celebrate some of our Lions who have gone above and beyond in their service.  This year we were delighted to have Bill Leslie join us as our guest speaker.  You might recognize Bill as the morning anchor man for WRAL news but there is a lot more to this man as we learned Thursday.  Bill is an accomplished musician, composer and singer as well as serving as an elder at his church.  He plays the guitar and celtic flute among other instruments.  You can learn more about Bill and his musical talents at BillLeslie.com.

Bill shared some stories about how he got started in the radio business which eventually lead him to the television business and ultimately as the anchor at WRAL morning news.  It all started with a song he wrote and recorded for a girl when he was younger.  That record got some air play on the radio which allowed him to tour the radio stations and he was hooked.  The rest is, as they say, history.

Did you know that Bill Leslie was once the “Tarheel Traveler”?  We know that Scott Mason has been doing a wonderful job in that role for the past several years (and Bill agreed that Scott has taken that segment to a new level).  We also got some very entertaining history and sample of North Carolina accents.  Bill is quite observant and adept at picking up on and impersonating these as we found out.  And finally, we also learned that many of his co-workers at WRAL not only have nick names but they have songs as well.  He sang a few of those for us.  I sure wish I had video taped this meeting! 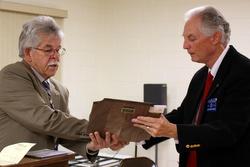 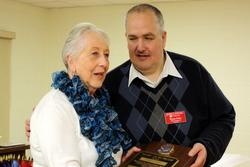 We had the opportunity to honor several of our Lions as well.  Two Melvin Jones awards were given this year.  The first was to our past president Lion Hamilton Martin.  The seond was awarded to a Past District Governer (PDG) Lion Gil Faber.  Unfortunately, Lion Gil passed away last week so the award was received by his wife Lion Barbara Faber and their son, (also a PDG) Lion Wayne Faber. 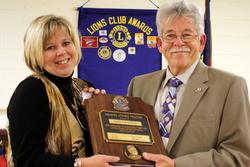 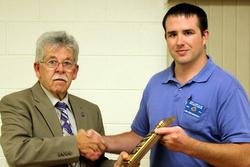 Two Jack Stickley awards were also given.  One was to Lion Joelle Lynde who was the president of our club a few years ago and the other was to Lion Chris Norcross who is currently our 2nd VP.

Finally, the William Jennings Booth Senior Lion Of The Year award was given to Lion Sid Harrell (pictured above right) who is currently our clubs 3rd VP.

The Apex Lions club thanks all of the people who helped us at the State Fair and all of our other events this past year.  We raised approximately $30,000 at the fair this year!