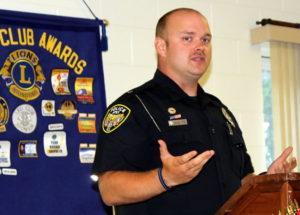 This evening our special guest speaker was Officer Kris Shuart (email) of the Apex Police Department Community Policing Division.  Kris has been a police officer for 3 years and joined the Apex Police Department about 3 months ago.  He started off his remarks by emphasizing that he was with us this evening not just because he was invited but also because he genuinely wants to serve the community and work organizations such as Lions who also serve Apex.

It’s no secret that police agencies in general have been in the news a lot recently and there are heightened tensions between police departments and the communities that they police in a number of communities in the United States.  Fortunately, we do not have such issues here in Apex.  In fact, the people of Apex have rallied around our police force in recent days. In fact, the week after the Dallas shootings there were 35 large pizzas delivered to the police department in support.  Officer Kris state that the anti-police sentiment is caused by a breakdown in communication between police departments and communities.  There are a number of programs being developed to help rebuild trust including one started in Cary called Building Bridges.   Kris is working on starting a program called the Barber Shop Rap Session which would be held at local barber shops and be an opportunity for the police to visit and have open discussions with the citizens about anything they want to discuss.  This would be a safe environment where people can ask questions and get the answers they need.  One common misunderstanding that Officer Kris highlighted was the manner in which the police talk when a situation is unfolding.  The police are trained to be very direct and blunt in their speech.  But sometimes that can be misinterpreted in the heat of the moment.  It is important to understand, though, that there is a reason that the police are being direct and blunt and that it is much better to comply in the moment and sort the misunderstanding out later if issues aries.

The Apex Police Community Policing Division gets involved in other programs as well.  These include programs such as: a motorcycle charity ride coming up on September 10th which is a fundraiser for the Special Olympics, Cop On Top at Chick-Fil-A, the Polar Plunge and selling T-Shirts and Hats as well.  And, of course, we cannot leave out Christmas With A Cop which is a program where a police officer takes an under-privileged child Christmas shopping at Target.  Officer Kris shared a story of how the child he took shopping asked for part of the money allotted to him to be spent on his brother because he needed it more.  That is not something a typical seven year old would say – very heartwarming.

The National Night Out event will be held on October 4th this year in the Target parking lot as usual.  This is an event that is oriented toward safety for the community and everyone is invited.  The Apex Lions will likely be there with our black tent doing free eye screenings to please plan to visit us as well!