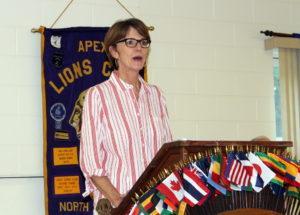 Most of you have heard by now that Apex High School is scheduled to be rebuilt next year. Our speaker this evening was Dr. Diann Kearney, Principal of Apex HS. Diann is originally from theGreensboro and has a degree from NC State as well as UNC. While attending graduate school at UNC Wilmington she met Matt White (former Apex HS Principal and current Apex Friendship HS Principal) so they have known each other for approximately 20 years. Prior to coming to Apex HS Diann was the assistant vice principal at Sanderson HS which recently underwent a similar renovation project. The swing space in that case was Sanderson HS. It’s likely that her experience going through a similar renovation was a factor in her getting the assignment at Apex HS.

An interesting fact about Apex High School is that more than 20 of the current teachers were once students of Apex High School. Diann became the principal at Apex just about a year ago. The philosophy and culture she promotes is that every child deserves a quality education. As an athlete herself, she is a very competitive person and that bleeds into her work ethic and the performance of the school overall as well. She believes in holding the students and staff accountable but also in encouraging success and excellence.

Apex High School is scheduled for a full renovation to begin in June of 2017. The swing space where classes will be held during the 2 year period that Apex High School is being built will be the brand new school currently being built near Green Level. which will eventually become Green Level High School once Apex moves back into their new building. The new building will be very different from the old one. The new building is a four story tall “donut” shape which will be much better suited for classes than the sprawling campus style layout that exists today. It will also be safer because the students will be in one building and will not have reason to go outside just to get from one class to another. There will also be some unique design aspects to this specific school as well to honor the past as well as look to the future.

Along with the new building there will be some traffic changes coming as well. Specifically, there will be some changes on Laura Duncan road to allow for “stacking” of more vehicles to reduce congestion in the area in front of the school.

Now with more than 28 years of experience in education she likes to say that she has “gone through school twice”.