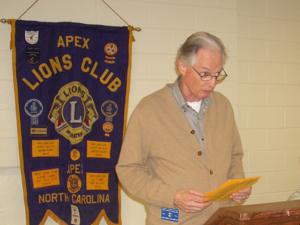 The speaker for our meeting this evening was our very own Lion Hamilton Martin.  Lion Hamilton brought handed out a copy of “Roaring Along” from 1959!  The newsletter which is currently our award winning newsletter published each month by Lion Newt Short still has the same name it did back then.  That, however, cannot be said of the name of the club.  In 1959 we were the known as The Lions Club of Apex.  And back then, anybody who was anybody in Apex was a member.  Membership consisted of virtually every major business owner in town which had a population of around 1370 people.  As a native of Apex, Lion Hamilton knew (or was related to) many of the lions who were members then, including the president of the time, Lion C. M. Edward, his father in law.