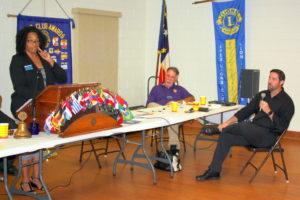 Our special guest speaker this evening was Martina Moore-Reid who is a Community Accessibility Specialist with the Division of Services for the Deaf and Hard of Hearing under the Department of Health and Human Services.  Martina has been in this role for more than 14 years providing advocacy, consultation, and training to agencies and individuals.  She is also involved in several non-profit organizations to talk about safety and train law enforcement, paramedics, 911 operators and local emergency preparedness workers about effective communications with Deaf, Hard of Hearing and Deaf-Blind communities.

Martina herself was born deaf which is believed to be the result of her mother contracting German Measles while she was pregnant.  It was not until she was 7 years old that her mom realized that she was deaf.  When Martina went to college she learned about sign language.  While in college she met a friend who had Usher Syndrome which is a vision which is a rare genetic disorder that caused her friend to lose peripheral vision so she had what we might call “tunnel vision”.  It was during this time that Martina realized that she had empathy for people who suffered from disabilities like her friend and decided to dedicate her life to helping.

She also told us about a program called iCanConnect which provides equipment and training to help people with combined vision and hearing loss connect with the world.  The division she works in works with North Carolina residents to determine if they qualify for services and then works with organizations like iCanConnect and others to provide equipment and services that would be the most beneficial to their applicants.  They provide items such as computers, smart phones, screen readers, tablets with magnification capabilities, weather alert radios and more.  They also have strong partnerships with organizations like the American Red Cross and local EMS departments to provide annual training for those organizations as well.

Finally, she shared some more practical information with us.  One thing that everyone should know is how to alert someone who is deaf or blind of an emergency.  The proper way to do that is to use your finger to draw an “X” as large as you can on either their shoulder or their back.  That is an indication to them that they need to stop trying to communicate and just follow your lead until you have gotten them out of danger.  Then, of course, you can explain what just happened.  She also played a game with us.  She “mouthed” certain phrases to see how many people in the room were able to read her lips. As you might have guessed, we did not get many right.  But the point of that exercise was to show us all how difficult it actually is to read lips.  She told us that people can typically understand only about 30% of what is said by reading lips.  That is why other forms of communication (like sign language or tactical signing) is so important.  In fact, she was signing to Jeff, her interpreter, who actually spoke the audible words for her entire presentation!  It was quite impressive and effective.

North Carolina has a very large population of deaf or hard of hearing numbering approximately 1.3 Million which consists mostly of seniors who lose hearing later in life.  The numbers are expected to rise significantly in the next several years.  Her division receives between 800 and 1000 applications for hearing aids state wide every month.

Our club president, Lion Wayne Faber, who is also a 911 Operator here in Apex added that his department offers a TTY service for calls specifically for deaf and hard of hearing people.  They always check that if they cannot hear anyone on the other end of the line when a call comes in.

You can email Martina to learn more at Martina.Moore-Reid@dhhs.nc.gov or call her office at 919-859-8526 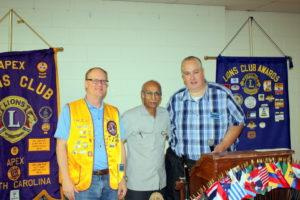 We also had a visit from an old friend all the way from India.  Lion Canu Patel was back again to say hello while visiting his daughter.  Lion Canu is from a town near Bombay (Mumbai) which is roughly the same size as Apex and is also a Past District Governor of District 323F2.  In his town there are actually 7 Lions Clubs which are all about the same size as ours.  That can give us some perspective about community service and volunteerism in other parts of the world.  And it should inspire all of us to engage more people right here in Apex as well.

Lion Canu shared some words with us  and showed some acupressure points that can be used to maintain or improve your hearing health because it was pertinent to the guest speakers message.  His visits have become an annual treat for us and he shares the newspaper articles and pictures from his previous visit each time he returns.