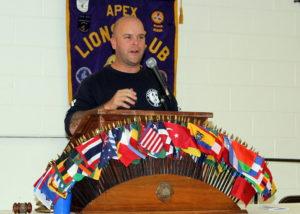 This evening’s speaker was Office Scott James of the Apex Police Department.  Scott became a policeman 10 years ago and worked for the Raleigh PD.  He attended a PeakFest event in Apex and really admired the town so he applied to the Apex PD and got hired about 5 years ago now.  Initially he worked the Flex Squad which is a noon – midnight shift that covers the transitions of regular shift work officers.  But when Chief Letteney was brought in and interviewed the department to understand what the best opportunities for growth and advancement would be Scott suggested a K-9 unit.  Chief Letteney agreed and they to to work.  It wasn’t easy because this had been attempted in Apex a few years earlier and did not go as well as it could have so there was some apprehension about the idea of trying it again.

So Scott began the process of selecting a dog to train and work with.  He say more than 75 dogs before selecting Rocky who is a Belgian Malinois.  The requirements were that he had to be social so he could be good around people and not bite people in crowds and he had to be hard working and full of energy.  Well, we met Rocky in person and I can tell you Rocky fits the bill! 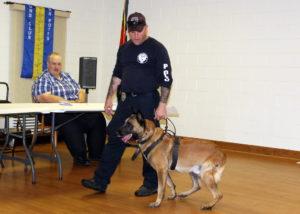 Once selected Rocky needed to go through training to sniff for narcotics and human scents.  Dogs have 200-300 million scent receptors compare to humans who have 5 million.  The way Scott described it is that when we smell a meat-lovers pizza we think “pizza”.  But a dog can actually smell the ingredients like the dough, sauce, cheese, and each kind of meat individually.  That’s how they can detect narcotics even if there is an attempt to mask the smell with other scents.

Scott also shared some success stories that he and Rocky have had.  For example, there was the time that they were called to find an autistic child who had wandered away from home near Highway 64.  It was a difficult task for Rocky because it was raining and that makes it much harder for Rocky to follow a trail but they did find the child safely.  And there was a time where there was an armed robbery and the suspect fled on foot toward Apex High School.  I personally remember that day because my son was on the football team and they ended practice early when the police arrived!  Anyway, Rocky tracked the suspect to where he was hiding and found him begging Scott not to let Rocky bite him.  Well done!  Finally, there was a time when Homeland Security called and asked for assistance in tracking down a specific storage container which was believed to have a large shipment of narcotics.  Rocky was able to find the right one in a field of dozens and it wasn’t actually in the area that Homeland said it should have been in.  Once again, Rocky sniffed it out! 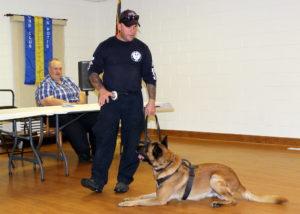 Officer James and Rocky laying down

And now, the department is expanding the unit.  A new dog has been selected named Zeus.  He is younger and even more friendly than Rocky.  He is currently in training and should be certified soon.  But because of Hurricane Matthew that might take a little bit longer than originally planned since the agency that usually does the accreditation is in Cumberland County.

Finally, we met Rocky.  He was absolutely full of energy – almost non-stop – it was quite remarkable.  And just like Scott said, he was completely focused on his toys.  He would scan the room and go hear people but quickly went back to his toys.  Unlike house pets that want to be pet and rubbed, Rocky was laser focused on his ball or chew toy.  Scot and Rocky have already served Apex, surrounding communities and even Homeland security well and we look forward to Zeus joining the team in December.  You can learn more about the K-9 Program at the Apex web site.