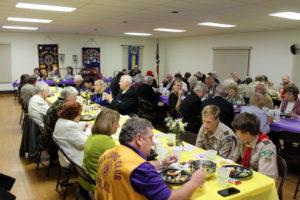 Our club celebrated its 79th year at our annual banquet. We also like to use this banquet as a way of thanking the many people who are not Lions but who support us and help us throughout the year. So we had many scouts, parents and leaders as well as fair workers and volunteers, widows and others in attendance as well. As usual, Lion Horace gave us the rundown and summary of the fair. In total we had 150 volunteer slots filled, 30 Leos volunteered, 25 scouts parents and leaders volunteered, CAPA members and family and friends as well. We could not have had the success that we had without all of you! 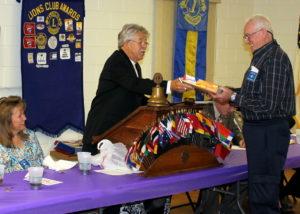 Lion Horace took some time to talk about some of the people who helped out in special ways this year. There were so many stories and so many to thank. From the biscuit makers to Frankie for opening up every day to Jerry Moore for his repair ninja skills to the evening shift for managing costs and especially Lion Joe Salvas who got the first annual award (a Sweet Potato piieeeeee) for volunteering for many shifts and keeping the dishes clean and the sink empty. And let’s not forget the setup and tear down crews who show up days before and after the fair. These included Lions Horace Johnson, Tony and Debbie Gravanda, Carl Cromwell, Jim Witek, James Herndon, Greg Monteleone, Hamilton Martin, Wayne Faber, Joe Salvas, John and Joelle Lynde. Forgive me if I missed anyone.

One “exciting” time, though, was Sunday morning – our busiest time – when the health inspectors showed up to do their inspection. They literally could not have picked a worse time! The attendance was down this year and so were our sales. But thanks to our efforts to keep costs down as well we still managed to make a very nice profit.

Over the course of the week, we fed 60 Governor Morehead students and 130 sight impaired people for free (that’s one of the services we provide during the state fair). After all of that, we managed to clear a profit of $28k this year. That’s only slightly less than last year’s proceeds even though the attendance and sales were down much more than that. We are so thankful to all who help us make this event a success because that money will be used almost exclusively in the community of Apex which is where We Serve! 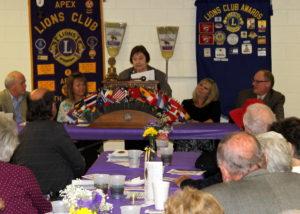 Then Lion District Governor Barbara Beltran shared a program with us. She shared her theme which is “Believe In Service” and International Presidents theme “New Mountains To Climb”. She also encouraged us to keep serving as we approach the Lions 100th year. We are the global leader in humanitarian services with over 1.4 million members worldwide now. DG Barbara shared some tips for how to be more effective and thanked us for our outstanding service in Apex even citing some of our clubs specific achievements so far this year. Finally, she presented a number of our members with milestone chevron pins for years of service achievements.

Last, but certainly not least, Lion Hamilton Martin presented some awards on behalf of the Apex Lions Club. The Jack Stickley Fellowship award is North Carolina’s highest honor and is named after the first International President from North Carolina. It is in honor of a person who has demonstrated continued humanitarian contributions of service and was awarded to Lion Barbara Faber. The Melvin Jones Fellowship award is the Lions Clubs Internationals highest honor and is meant for a person who has demonstrated dedication to humanitarian service. This years recipient is Lion Joelle Lynde. Finally, the Apex Lions Club Lion of the Year award was presented to Lion John Lynde for overall enthusiasm for the club and desire to advance the club. Lion Hamilton did a wonderful job of presenting these awards and had some tremendous words of encouragement for everyone. 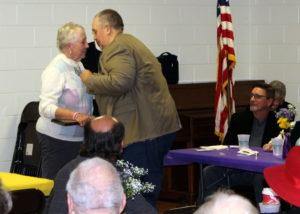 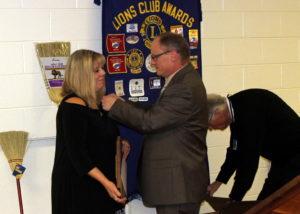 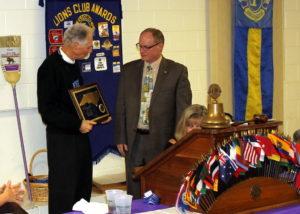 Once again, we want to thank everyone who has helped us in the past and especially this year. If you would like to learn more about Lions or possibly even join us, please contact us. Information can be found on our web site at ApexLions.org.