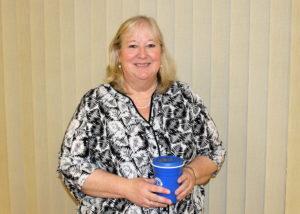 This evening was Melaney Stein from the North Carolina Department of Health & Human Services Division of Services for the Blind (DSB).  Melaney is one of two DSB social workers for all of Wake County.  That’s a lot of area for two people to cover!  Melaney began as a social worker for the blind on January 17th not long after her counterpart Christine Harrington began on January 3rd.  She is originally from Louisiana but moved to Raleigh in 1984.  In 1985 she began working at the Raleigh Lions Clinic where she worked for 15 years.  After that she began at DSB and held several other positions all in relation service to the blind as she moved into more managerial roles over time.  Her desire to get out of management roles and back to individual one on one service lead her to take the role as social worker at DSB where she is now.

Her view of the DSB Independent Living Service Program is that they provide essentially four types of service:

The NC DSB does not receive any federal funding but they do, of course, get state funding although it is limited.  In fact they have already been instructed to stop purchasing items this year.  However, good relationships with other organizations like area Lions Clubs and other agencies enable them to get access to additional help by referrals.  For example, Melaney recently assisted one of her cases in filing the request for eyeglass support from our club and we are handling that now.  Similarly, she requested that if we know of anyone who might be able to benefit from their other services we should refer them to the DSB.  We can be a resource for each other going forward.  It was wonderful to learn some of the services that are available through the DSB so now we have a much better idea of what is offered and when it makes sense to make a referral.

If you would like more information you can check out the DSB Web site here or contact Melaney directly at: