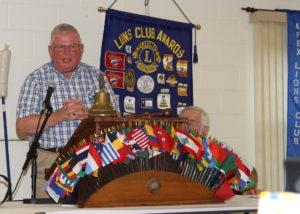 We had a team of presenters this evening at our meeting.  They were all representing Canine Companions for Independence (CCI) and the Lions Project for CCI.  First up was Lion John Beere from the Zebulon Lions Club.  Lion John was in the Kiwanas for 18 years prior to becoming a Lion and then spent 5 years as a Lion in Mannassas Virginia before moving to North Carolina.  He searched for a Lions Club to join because of his passion for the Canine Companions for Independence program which he was involved with in Mannassas.  He is now a trustee and an area director with CCI. 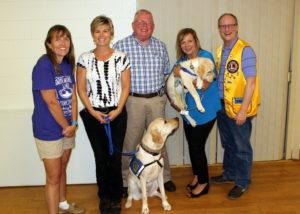 Lion John brought with him four special guests.  Elizabeth Penny and her therapy dog Pistachio as well as Monica Laliberte and her puppy in training Bongo.  Yes, this is the same Monica Laliberte from WRAL.  In fact, here is a video from WRAL about Bongo’s arrival at RDU.  Bongo is the 8th puppy that Monica and her family have raised for CCI.

Monica shared some of her story about how she first got involved with raising puppies and how she and her family have so thoroughly enjoyed the endeavor.  A puppy raiser is responsible for taking a puppy through the stages of being a puppy to growing into a well behaved dog.  This involves the basic things like housebreaking, socialization all the way through learning manners and approximately 30 voice commands.  One of the most common questions she gets is: “How do you give the puppy up after you have trained it?”  She acknowledged that it is still very difficult and emotional as you would expect.  But after having met some of the people whose lives have been changed so dramatically of the good, it gets much easier knowing the difference that it can make for someone.

After that Elizabeth shared some of her story and some the ways that Pistachio helps her therapy patients at WakeMed.  Pistachio is actually the second facility dog that Elizabeth has had.  She shared that working with a dog is a lot like raising children.  Consistency is very important.  Focusing on the positive things the dog does and ignoring (as much as possible) the negative things helps train the dog to do what it is best at.  Sometimes she takes patients down to the gift shop at the hospital to show them the benefits that a dog like Pistachio can provide.

Canine Companions for Independence is an organization that exists outside of Lions.  But Lions have supported CCI since it was started in 1975.  And the Lions Project for Canine Companions for Independence is a 501(c)3 organization established to create awareness and provide support for CCI by providing highly trained assistance dogs free of charge to adults, children and veterans with disabilities.  So far Lions have provided over $3 Million in support through LPCCI.  The dogs provided through CCI provide virtually every kind of service a dog can be trained to provide with the exception of vision service (Lions also support a separate organization that does exactly that, though, don’t worry).  There are four categories of service provided:  Service dogs assist people with disabilities by performing daily tasks, Skilled Companions enhance independence for people with physical, cognitive and developmental disabilities, Hearing dogs alert people who are deaf and hard of hearing, an dFacility dogs work with professionals in visitation, education, health care or criminal justice settings.  It costs approximately $50,000 to raise and fully train each dog so there is a tremendous need for support.  If you would like to help please visit the links above and find out how you can get involved.  Maybe you can be part of changing someones life too!