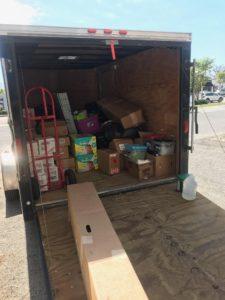 Hurricane Florence has had devastating and lasting effects on eastern North Carolina.  We have learned that brooms are one thing that is desperately needed for the cleanup effort.  As you may know, one fo the things Lions do is sell brooms!  So the Apex Lions Club immediately donated $1,000 worth of brooms and had them delivered to the affected areas as quickly as possible.  We sent some to Harkers Island which is down east of Morehead and was hit very hard by Florence.  We also gave some to the Salvation Army in Morehead.

Still more brooms were given to Temple Church in New Bern.  They said the brooms would be very helpful as they were in the process of removing the mud from 500 homes.  At the time we left the brooms there were still homes that were flooded and could not be reached yet.  The NC Baptist Men Disaster Relief team has setup at Temple Church where their operation consists of at least six trailers and volunteers everywhere you look. 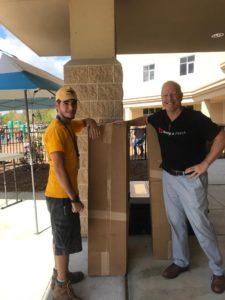 Recipients of a case of brooms at Temple Church

In addition to donating the brooms, the Apex Lions Club also made another $1,000 donation to the disaster relief fund setup by NC Lions District N (the district that was most heavily affected).  That money will be used by Lions in the eastern part of the state and will go directly to those in need.

And this year at our State Fair booth we would like to give everyone an opportunity to help us help the victims of Hurricane Florence.  We sell our patio brooms for $15.  But during the State Fair, we are offering you the opportunity to purchase two brooms for $25 – one for you and one to be sent to eastern NC.  Or you can just send them both there.  If you would like to help, please visit our booth in the metal buildings near Dorton Arena.