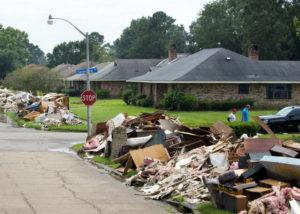 The Apex Lions Club stepped up to help flood victims in and around the Baton Rouge, LA area much like we did a few years ago when we helped the tornado victims in Norman Oklahoma. The unexpected flooding which resulted from a storm that just stayed stationary over a particular area for an extended period of time occurred in late August. These photos show what typical streets in the area look like now as the homeowners take their flood damaged furniture and personal belongings out to the street for disposal. 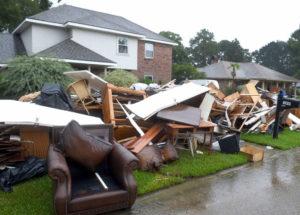 After hearing of this tragedy the Apex Lions Club board voted to donate $1000 directly to the Baton Rouge South East Lions club to make sure that the money went directly to someone in need with zero administrative fees removed. Then one of our members made an anonymous match so they were able to donate $1000 each to two different families in need. 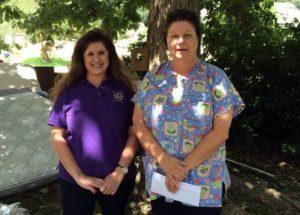 Pictured here are Mrs Donna Dees (right) and Lion Helen Lemoine (left), Secretary of the Baton Rouge South East Lions club.   The Dees live in Dehnam Springs LA.  Their house was actually flooded twice.  Water came up about 5 feet initially then on Saturday the water receded only to rise again to about 3 feet on Sunday.  They lost all their possessions.  They are currently living with their son in Amite, LA about 15 miles from their home until their house can be renovated. 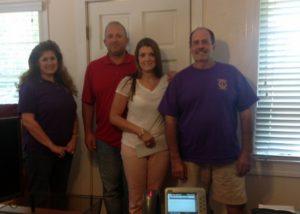 In this second photograph the man and women on the right are the McLeod’s, Casey and Melissa, and they are holding one of the checks from the Apex Lions Club.  She and her husband live in Greenwell Springs, LA . Their house had 4 feet of water and they also lost everything in the house.  They are currently living in a camper until their house can be restored from the water damage. Also shown in the photo are Lions Lester and Helen Lemoine. Lion Lester is President of their club.

Approximately 90% of the homes in the Parish of Livingston where these two families reside were flooded.  East Baton Rouge Parish, where the Lemoine’s live,  about 75% of the homes flooded.

The money was delivered by the President and Secretary of Baton Rouge Southeast Lions Club.
President Lester Lemoine explained to them where the money came from.  He said the families were so grateful for the support from the Lions.  Lion Horace talked to Lion Helen, it seems other Lions Clubs have also contacted them after our action and are offering financial help as well. The Baton Rouge South East Lions Club sends a “Thank you” to the Apex Lions Club for reaching out to their community.

We are very proud to be able to be Lions who Serve in ways that can make a real difference in people’s lives.