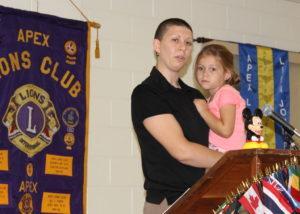 This evening’s speaker was Amanda Lunn, mother of Amber Lunn. Amber is a brave young 5 year old girl who is currently in Pre-Kindergarten. She is also dealing with some very serious eye issues. Amanda described their journey and how they have dealt with this situation so far. It started when Amber was about 2 weeks old and Amanda noticed a “glow” in Amber’s right eye. She said it resembled the kind of glow that you see in animals eyes sometimes. When she asked the doctors about it they dismissed it and said it was not a problem. But Amanda continued to see that glow in her daughter’s eye and continued to ask about it but it was always dismissed the same way.

On her 18 month checkup, Amanda asked again and this time was given the opportunity for a referral to an eye doctor, but was also told that it would be a waste of time and money so she decided not to go. But about a month later some lazy eye symptoms started to develop (Amber’s eye would veer to one side and not align proper with the other eye). Then a few months later the doctor also noticed the lazy eye symptom and the first visit to a specialist was setup.

The prognosis was that Amber’s right retina had completely detached and the left retina had partially detatched. The Lunns were told to prepare for surgery and be prepared for the possibility that both eyes may need to be removed depending on the source of the problem. Their options were to go to Duke or to a facility in Philadelphia where the specialists could help. There was some struggle to get answers and some additional issues with finances but they ultimately ended up taking Amber to Sloan Kettering in NY. The treatment she has received there has been fantastic. The doctors and staff are all in sync and they have a unified plan for treatment now. The condition was ultimately diagnosed as “bilateral retinoblastoma” which is a form of eye cancer.

The doctors did end up removing Amber’s right eye and have been treating her cancer with Intra-aterial chemo therapy. The largest tumor in her left eye was just 60 cells away from causing significant or complete blindness in her left eye as well. But at the moment the tumors are all just scar tissue. At one point the Lunns were traveling to NY every 4 weeks for 3-4 days. But now they are on a 6 month cycle for their next visit and checkup. Amber is still at risk for the cancer to return so they could end up back on the 6 week schedule at any time. And even as the risk of the initial type of cancer returning goes down, the risk of other types of cancer actually increases for Amber. And, sadly, Amber may never be able to have children of her own due to the chemo therapy. But even if she is able, there is a roughly 45% chance that her children will have this same type of cancer because it is genetically transmitted.

The Lunns have received some assistance from a group in Cary which has covered their flight costs (Cary Children’s Flight Of Hope) and also some assistance from the Ronald McDonald House. But when you have a child who requires this much care it makes working full time very difficult and there are a good deal of expenses that are not covered so assistance would be appreciated. You can read more about Ambers Aspirations on Facebook.

One thought on “Ambers Aspirations”