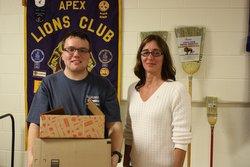 For our first meeting in March, we had a lot of different things going on.  First, we had a special guest.  Pictured to the left is Nathaniel who is a local high school student.  Nathaniel needed an idea for his senior project and came to realize that almost everyone in his family wore glasses.  He started thinking that it would make a lot of sense if someone recycled glasses and found out that the Lions do that.  So he did some research, found us on the web and decided to come to a meeting to get to know more.  Not only did he have a lot of fun watching us conduct our business, but he got a nice dinner and learned a little bit more about how we recycle glasses.  The Apex Lions Club collects approximately 300 pairs of glasses each year.  Those glasses are sent to our recycling center where they are analyzed to determine the prescription of the lenses and cataloged in our computer system so we can match them to soneone in need anywhere around the world. 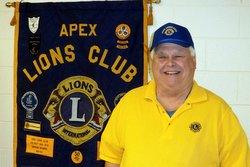 We also recognized Lion Chip Pierce.  Lion Chip comes to us from Fulton, NY where he was serving as 2nd vice president before he moved to North Carolina.  Lion Chip also likes to play golf.  He must be very good because when I asked him if he was very good he replied “I play a LOT”.

Finally, we heard from Lion Horace about the Fish Fry coming up later this month (March 21st).  Many years ago the fish fry was a barbecue but it was switched to a fish fry back in the 80s.  This year the proceeds will be split between a local single mom struggling with breast cancer and a wounded warrior we have not identified yet.  Apex Lions were encouraged to sell tickets for these worthy causes.