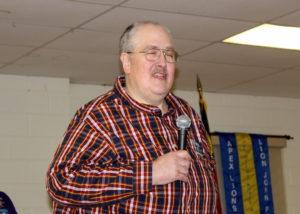 This evening we had a very full house as the Fuquay Varina Lions were prowling and we had our annual joint meeting with them.  As their sponsoring club we have had a long standing tradition of having a joint meeting every year.  And, as always, there is a lot of fun when we do that.  It’s the tail twisters favorite meeting of the year.  This year we had an additional challenge in that we found out last week that our caterer went out of business so we had to scramble to provide a meal.  Special thanks go to our Lion Tamer Joe’l Lynde for pulling a meal together on very short notice!

Our guest speaker was our own PDG Wayne Faber.  But he was not presenting a Lions program as he so often does.  This time he was presenting a program about his work as a 911 Emergency Dispatcher.   Wayne first shared with us the breadth of responsibility of what it means to be a 911 dispatcher as well as a little bit about the history of the system in terms of how and when it was established and why.  Then he shared some personal stories of things that have actually happened while he was on the job (both good and bad).  And finally, he shared some recorded audio used for training purposes.  There were some silly examples of when people call 911 for things like not getting what they ordered at McDonalds to some very heart wrenching ones like one from a man who called to say that he had killed all of his children and grandchildren and was waiting for the police to arrive to commit suicide (which he actually did). 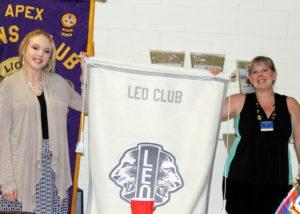 We also had the privilege of hearing from the president of our Leo club at Panther Creek High School, Samantha Lenger.  Samantha is a very energetic and passionate student who loves being a Leo!  She let us know that the school now has an eyeglass collection box and reminded us that Leos helped at both the State Fair booth as well as the Fish Fry this year.  They also did a roadside cleanup project and are working on a fundraiser of their own right now.  The student Expo went very well this year so the membership should be increasing in the Leo club next year.  Samantha is so passionate about the Leos because the focus of the club is on meaningful service – not just service hours for the sake of checking off a box like so many of the other opportunities at the school.  Her passion came out when speaking with students at the Expo so that is a big reason why the Leo club is growing.  At the end, Lion Joe’l Lynde presented Samantha with a new Leo banner that can be used at future events and will also be used for awards patches as the Leo club earns them. 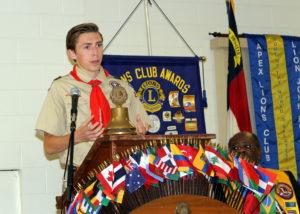 Next we had a presentation by Ryan Cunningham.  Ryan is a life scout in Troop 209 working towards his Eagle by planning his project now.  He plans to build Steeplechase Barriers for his Apex Friendship High School track program so they can practice for the event.  The total cost for the project is $500.

Lion James Herndon reminded us that the Apex Lions High School Relays are coming up on April 22nd and he sent around a signup sheet for that event.  Lion Larry Jordan (co-chair) may not be able to help as much this year since he just had knee replacement surgery so they may need some additional help.

Lion Horace Johnson gave an update from the Fish Fry.  As bills are paid and more ticket money is turned in the accounting is getting clearer and the net proceeds appear to have gone up a bit since last report.  Given that the event was on St. Patricks Day and the local catholic church also had a fish fry the same day (they usually do not do that) this was an excellent result for us and for the Lunn family.

Lion Horace also announced that we do, in fact, have the opportunity to move into the former Sunrise location this year.  This is right next door to our previous location and is twice as big!  This is a very exciting opportunity for us to potentially raise even more money at the State Fair going forward.