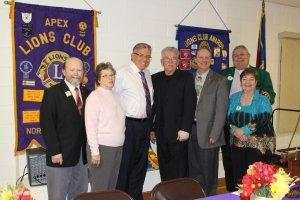 We celebrated our 77th year in style this past Thursday night.  We had about 80 people in attendance for our banquet this year. These included District Governor Lion Ron Beltran and his wife 2nd Vice DG Barbara Beltran, 1st Vice DG Lion Karl Ernst and his wife Lion Barbara Ernst, members of the Apex club and their spouses, volunteers who helped with the State Fair, our new biscuit makers Diane Braden and Jerry Boyd, our general fix-it expert Jerry Moore, members of our Leo club at Panther Creek, volunteers from CAPA, Boy Scouts of Troop 209, widows of Apex Lions, and our special guest speaker Greg Fishel from WRAL. 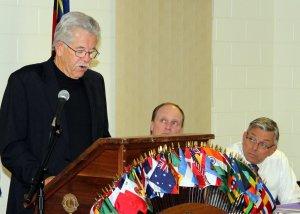 This is a night where we get to celebrate our anniversary and also disclose the results of the State Fair Booth fundraiser. The Master of Ceremonies was Lion Horace Johnson who also just happens to be the State Fair Booth manager and has been for the past several years. Lion Horace guided us through the agenda smoothly and informed and entertained us along the way. He shared some stories about things that happened around the fair this year. Like how we had to scramble to get a new fryer – which we were able to find on Craigslist for much less than a brand new one would have cost. And how the cash register broke one evening and we had to revert back to using a calculator for a few hours while we fixed it. And also how his golf that he uses to get from the RV to the fair booth and back broke and had to get fixed. After all the reminiscing and congratulations, he shared the news about the fruits of the labor with us. When all was said and done, we raised over $27k this year. Not bad at all! 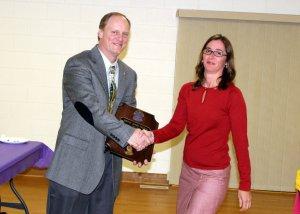 The annual banquet is also a time when we present some special Lions with awards. The first award we presented was the Melvin Jones award. The award is named after Melvin Jones who started the movement that brought several business clubs which were providing services to their communities together and ultimately lead to what we now know as Lions Clubs International. This years recipient has shown good Lion traits, has been the president of our club, and was active in the formation of our Leo club at Panther Creek High School. The 2014 Melvin Jones award goes to Lion Bekki Bennett. 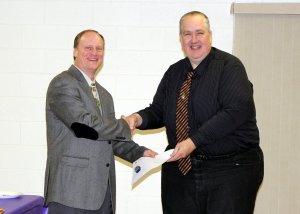 The next award is knows as the Jack Stickley Fellowship. This award is given in honor of North Carolina’s first International President and it is the highest award that is given by North Carolina Lions. It is a cherished award and the funds from this award go towards the Jack Stickley fund. The interest from this fund are used by the North Carolina Lions, Inc. to pay administrative costs so that all funds raised are used for services to visually impaired people (we call them V.I.P.s). This years recipient is also a past president of our club, is a long time Lion with a history of being available whenever needed, has been a zone chair, a district governor and is currently the VIP Fishing tournament chair and a region chair. The 2014 Jack Stickley Fellowship goes to Lion PDG Wayne Faber. 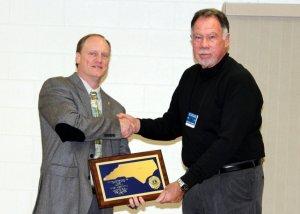 Lion Carl Cromwell receives the 2014 Lion of the Year award

The final award of the evening is the William Jennings Booth Lion of the Year. This is an Apex Lions Club award that recognizes the Lion in our club who has shown outstanding support of the clubs activities and demonstrated Lion traits for the past year. This years recipient is about to celebrate his 10th year as a Lion. He has served in several leadership positions including committee chair, vice president and president and is currently service on the board of directors. He and his wife are both Lions and they transferred to our club back in 2011. He is a strong contributor and willing worker. The 2014 Lion of the Year goes to Lion Carl Cromwell. 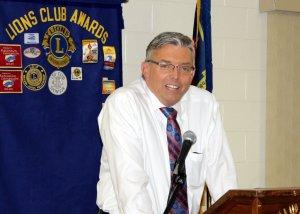 Our special guest this evening was Greg Fishel from WRAL. We have watched Greg on TV for many years. He is a graduate of Penn State University, is married and has two boys.

His speech was very inspiring. He told us about how he recently spoke at a conference on the topic of science and religion. He stated that he sees science as the discovery of religion. We have much more in common as Christians than we do differences. Rather than always looking for sources of information that support our views, we should try to seek out various sources of information, outside of our normal viewpoints, and consider other possibilities as well. Be prepared to admit that sometimes you are wrong, and that is OK. And then he joked about how that happens to him a lot with weather forecasts!

Believe it or not, he was an introvert for the first 30 years of his life! Taking the position at WRAL forced him to change in very uncomfortable ways. He shared some of the ways he did that and his experiences in learning how to adapt. All in all, he really enjoys working at WRAL and he feels blessed for having found the one station where he can continue to focus on the science and statistical detail that he so enjoys, but also still get to be the chief meteorologist on prime time television. He has great autonomy and loves learning new things in his career.

If you have watched him for any length of time, or have met him in person, you know he enjoys the occasional pun. Oh, ok, he’s crazy about them, actually! And this evening was certainly no exception! We were amazed at how quickly he could come up with them and how many he had. When he finished, we presented him with a Lions Club coffee mug as a thank you gift and he immediately asked if we could take his picture with it so he could have his very own “mug shot”!

He also let us know that he was flying out in the morning to head to Buffalo, NY to do the weather forecast from there tomorrow evening. The have been getting a lot of snow there. I wondered if they are testing him to see how much he really likes snow?

Before the evening came to a close, Lion John Lynde recognized one very important person. Throughout the evening, Lion Horace tried very hard to recognize everyone who helped with our success at the State Fair. So Lion John had the honor to recognize the person who worked the hardest of all. Lion Horace starts planning for the fair months in advance, replaces fryers, grill exhaust vents and prepares the booth several days before anyone else arrives, actually lives on the fairgrounds with his wife, Franke, the week of the event and then spends weeks afterwards cleaning up, paying bills and reconciling the accounts. And that was not just this year, but he has done this for many years. This event simply would not be the same without all of his hard work. He Serves! And that is the best compliment a Lion can get! Lion Horace got a standing ovation from everyone in attendance. Thanks again Lion Horace for another great State Fair!