The 2017 NC Lions State Convention concluded earlier today in Raleigh. By all measures it was a successful event. Below are some notes I took during the weekend. 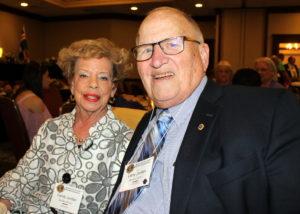 At the banquet on Saturday night there were a number of awards given out as is customary. One of our Apex Lions, Lion Larry Jordan, received recognition for 50 years of membership. There were a total of 23 Lions in NC who received this recognition but only Lion Larry Jordan was in attendance and able to stand and be applauded for this milestone. He brought his wife Candy and his daughter Amy with him to the banquet to celebrate with him.

NCLI President Charles Holleman was the first of many to thank the volunteers that helped prepare Camp Dogwood for the upcoming summer of campers. The work done by these volunteers saves the camp anywhere from $30,000 to $40,000 in expenses every year. That’s a significant savings and makes a huge difference in the budget for Camp Dogwood.

This year marks the 50th anniversary of Camp Dogwood and a special celebration is being planned. The event should occur on July 19th and more details will be made available as they are finalized. In addition to the celebration party there are expected to be some commemorative pins and T-Shirts for sale.

PDG Jana Peedin gave an update on the Brighter Visions campaign. This year the statewide goal was $587,500 and we are currently at about 57% overall. We only have two months left so we are cutting it close. A request was made for clubs to get funds in as quickly as possible. District L is at 66%, District I is at 51%, District O is at 62%, District N is at %56 and District S is at 59%. These funds go toward NCLI programs that directly support VIPs so this is very important.

Past International President Sid Scruggs made a few comments as well. Starting in 2017-2018 there will be a focused effort on Diabetes Awareness from LCI. Also, the international exchange student program is being revitalized.

Past International Director Harvey Whitley gave a membership update. NC Lions have done a great job this year with respect to membership. We have chartered 5 new clubs so far and could very well have 8 or 9 by year end. North Carolina leads the south eastern United States in membership growth and is the only state in the south east with positive growth.

I attended the Club Presidents meeting with International VP Gudren Yngvadottir. In case you have not already heard VP Gudrun is the first ever female VP and is expected be the first ever female International President in two years. She talked a bit about the new position created this year by LCI called the LCIF Coordinator. The full description is still being developed but the general idea is to improve communications directly between LCI and the clubs instead of having much of the communication going through layers of the organizations which is slow and error prone. Next year they are expected to announce yet another new role called the Global Services Team leader (GST). This will be a role similar to the existing Global Leadership Team leader (GLT) and the Global Membership Team leader (GMT). The key word in all of these is “Team”. We need to continue to work as a team and find ways to be even more effective as we go forward.

Along that same theme the leadership at LCI has taken this 100 year centennial anniversary period to both reflect on what we have done and the impact that we have already made as well as to look forward and plan out what we can do in the next few years to be most effective. Some of the things that have been discussed and worked on are things like the new focus on Diabetes Awareness. But we are also looking for ways to enhance the experience and value of membership for each member and even start to reshape the image of Lions where needed. Members should be able to enjoy club life and get great satisfaction out of helping others at the same time.

Regarding Diabetes there are several levels at which Lions can be involved. The first is in Diabetes Awareness for those who don’t have Diabetes (or who don’t know they do). Another level is providing summer camps for kids who have Diabetes and a third level is in clinical research and the search for a cure. There are programs being developed by LCI right now and there will likely be some fundraising opportunities around these activities and programs being announced very soon.

There are three primary reasons that people become Lions: To provide service to others, to attain a sense of belonging, and to grow as a person and a leader. We want to continue to be world leaders in community service and humanitarian service. In order to do that we need to take care of our current members, grow our membership, and develop new leaders.

I even had the opportunity to spend a few minutes with VP Gudrun to present an idea to her for consideration by LCI. She agreed that it is a good idea and asked for more details. I’m thrilled to know that she plans to present this forward to LCI and hope to be able to report more on that subject if and when it progresses.

Next year’s NC Lions State Convention will be April 27-29 in Greensboro at the Greensboro at High Point Marriott Hotel – hold the dates!