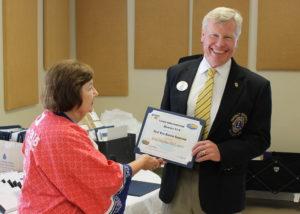 The second annual District 31S Awards & Installation banquet was held in Pilot, North Carolina on July 22nd, 2017. Now Past District Governor Lion Barbara Beltran began the remarks with a summary of the events of the past year. Two new clubs were chartered – the Ahoskie Centennial Lions Club and the Wake Southwest Centennial Lions Club. Two grants for Pedia-Vision screeners were provided by LCI. The State Convention was held in Raleigh for the second year in a row. District 31S finished in 1st place for percentage of goal reached for Brighter Visions at 90.25% which was the highest of all districts in North Carolina. But most importantly, she witnessed clubs helping other clubs and joining together for service events. She thanked the Lions of District 31S and congratulated us on a great year. Many awards were given out with some assistance from Past International President Sid Scruggs and current International Director Gwen White and there are pictures of all of them available in the photo album link below. 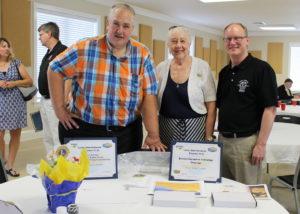 And some individual members of the Apex Lions Club won awards as well: 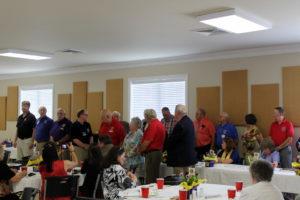 Then current District Governor Steve McLaurin introduced the special speaker invited to do the installation of the new cabinet for the 2017-2018 year. Lion Steve joked about how he is a long time story teller, but he does not hold a candle next to the guest speaker Past International Director Lion Lacey Presnell. And, of course, Lion Lacey did not disappoint. He began his remarks with a funny story that made us all laugh. Afterwards we got down to the business of installing the new cabinet. 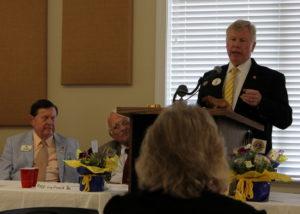 Finally, DG Steve made a short but effective speech about the upcoming year and his vision for District 31S. He has two goals for every club. 1) To increase service by at least one project and 2) to increase membership by 10%. We have a great district with many great leaders and he is confident that we can achieve these goals if we set our minds to it. The 2017-2018 year should be another great year for District 31S.