Tonight’s meeting marked the beginning of the transition from one club year to the next.  As secretary, Lion Nick Somma, gave a summary of the accomplishments of the year under the direction of President Lion Chris Norcross.  Here are just some of those accomplishments: 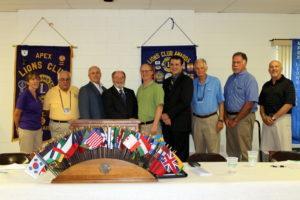 Past District Governor Lion Gene English from the Garner Lions Club was present to perform the formal installation of our new officers.  Two highlights that Lion Gene raised were Lion Nick Somma who has served as Secretary for 14 years and achieved a 100% Secretary award every one of those years (only one other person in the district has such a good track record) and Lion John Potts who has served as the Tail Twister for many years and does a really good job performing this “lost art”.   Pictured here (left to right) are:  Jolene Umbenhauer (1st VP), Nick Somma (Director), Tony Gravanda (President), Gene English (PDG), JohnLynde (Secretary), Chris Norcross (Immediate Past President), Hamilton Martin (Director), Carl Cromwell (Director), Tim Campbell (2nd VP). 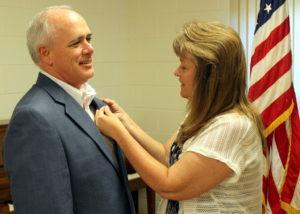 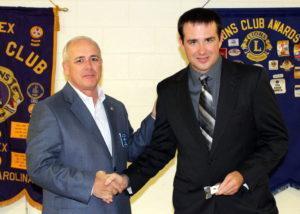