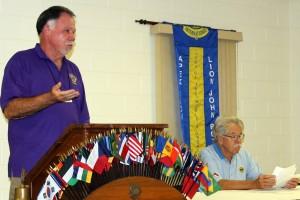 As our Membership Chair, Lion Horace Johnson lead our meeting this past week. He began by discussing preparations for the NC State Fair booth which is quite appropriate since our number one priority as Lions is Service! We have a work day scheduled for Saturday, October 3rd and need several able bodied Lions to come help get the booth ready for the week.

We will have lots of help from other volunteers at the fair as well this year. The Panther Creek Leo club has about 80 members this year and most of them are brand new to Leos and service projects. They should be a big help this year. Also, the scouts and CAPA teams will be joining us again as usual. It’s great to have such reliable support from these organizations.

After that, Lion Carl Cromwell was introduced to share why he is a Lion and he had an interesting way to do it this year. He had four questions and invited four different Lions to come up and answer one question each.

The first was Lion Hamilton Martin who had the question: “Why did you chose to become a Lion?”. Lion Hamilton has been a Lion for 11 years and joined when he was in his 50s. Although he had been asked many times over the course of his life growing up in Apex, he finally got to a point in his life when he realized that he wanted to do something for others. Since he did grow up in Apex and already knew about the reputation and history of the Apex Lions Club for community service the decision was clear.

Next up was Lion Lee Strader who had the question: “What does he enjoy most about being a Lion?”. Lion Lee was never much of a “joiner” before becoming a Lion. But his wife encouraged him to get out more and meet new people and make new friends. So he joined the Apex Lions Club and has made many new friends and has even become less introverted now to the point of joining the Apex Community Garden as well. He really enjoys his new friendships and the opportunities it has provided him. It really feels good to help others. Lion Carl also added a story about how he felt when his former Lions Club (when he lived in TN) bought an assisted reading machine for a lady in a nursing home. She was so excited to read her bible with that machine since she had not been able to read it for over 10 years. What a great feeling!

Then Lion Tim Campbell, a relatively new member of our club answered the question: “How do Lions help others?” Lion Tim and his wife Lion Donna are natives of the area as well and they also had a desire to help others that drove them to become members of the Apex Lions Club. He spoke about how he is amazed at all the different ways that Lions Clubs help others including: Camp Dogwood for the blind and visually impaired, Free eye screenings – and we now have a machine to do that as well, Eyeglass collection and recycling, canes for the blind, Leader Dogs program, Clinical Eye Research and so much more.

Finally, Lion Larry Jordan answered the question: “What is the role of Lionism in the community?” Lion Larry is in his 49th year as a member of the Apex Lions Club. He reminded us that Lions were started by groups of business men and professionals in the community who wanted to give back. Lions Clubs are service clubs – not civic or social clubs. Our role is to serve. And that’s why our motto is: “We Serve!” In Apex, we have stayed true to that motto and role over the years. We have long relationships with local schools having hosted the Apex Relays at Apex High School and supported the track team there for many years as well as having a Leo club at Panther Creek High School. We have been granting scholarships at Apex High schools for many years also. In addition, we have sponsored Boy Scout Troop 209 and Pack 312 and built them a place to meet regularly as well has having supported them throughout their existence. Every year we have a Fish Fry in which we raise funds for some local cause which can be anything from an individual to a town project or a third party beneficiary like the Western Wake Crisis Ministry. And, of course, we have our booth at the NC State Fair where we raise the funds that our club uses for the remainder of the year to fund the various Lions Club International and NC Lions, Inc. programs as well as to meet any other local needs in Apex.

As you can see, Lions serve in many ways. So tt can be difficult to summarize exactly what Lions do. But it’s not hard to start to see why people want to be involved with Lionism. We hope you will come to a meeting sometime and get to know the Apex Lions Club a little better. You might just make a great Lion yourself. Come join us in serving Apex!