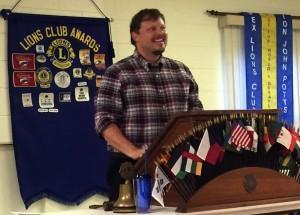 Stacey Sears, owner of Hollands Jewelers in Apex was our guest speaker this evening.  Stacey and his wife Ginny are both natives of Apex and he remembers going to Hollands Jewlers as a child.  Mr. Holland called him while he was studying at Campbell University and asked him if he would be interested in working at Hollands Jewelers.

Hollands Jewelers was started in 1959 by Mr. Holland who was an orphan.  Understandably, he had a difficult life and only made it through the 8th grade and then became a watch maker.  But he always wanted to become a Gemologist.  Stacey learned a lot from Mr. Holland including how to treat people.  Mr. Holland never opened on Sunday because he put the Lord first and he shared that with everyone also.  Mr. Holland encouraged Stacey to become a Gemologist himself, so he did.  A Gemologies has the skills to grade diamonds and other gems as well as design jewelry using them.

Funny story:  Ginny also worked at Hollands and actually sold Stacey his first engagement ring.  Fortunately, that did not work out and he ended up marrying Ginny and buying Holland’s Jewelers.

We had a lot of questions from the members and Stacey talked for quite a while about how things are changing now in the market regarding manufactured stones like cubic zirconium and moisenite.  It was a very lively discussion.