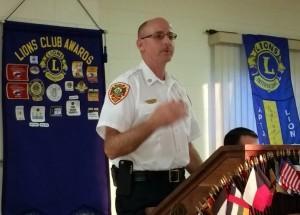 The guest speaker for our first meeting in April was the relatively new Apex Fire Chief Keith McGee.  I lost my notes from this meeting so I am writing this purely from memory!  I believe he said he had been hired last October or November if memory serves me correctly.  He replaces long time and well respected Chief Mark Haraway who retired last year.  He spoke a lot about filling the big shoes of his predecessor.  He was grateful and complementary of the state of the Fire Department as it exists today.  He believes that his biggest challenge will be to find ways to make improvements and raise the bar even higher.

But that certainly didn’t seem to thward his ambisions!  He spoke about some new training programs that the department was taking to expand on the ways that they can help Apex and the surrounding communities.  For example, Apex has one of the few dive recovery teams in the area.  And as new methods and technologies are developed, the Apex Fire Department will keep up to date with these new innovations.

Another example is the new fire truck which is on order for the new fire station to be opened later this year.  The technological advancements in that engine are quite impressive. 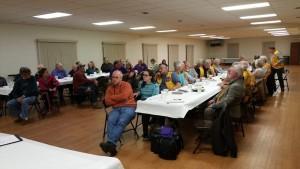 The first meeting in April was also our annual prowl from the Fuquay Varina Lions Club.  Every year we invite the club we sponsored to come back to visit and share with us.  It was a great meeting and we had a very large crowd between the two clubs.  We came close to running out of food – but everyone was fed and left feeling even safer knowing that Chief Kieth McGee and the Apex Fire Department are on the job!