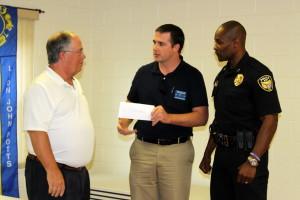 In our first meeting of the new year, and Lion Chris Norcross first meeting as president, we had the opportunity to present checks to our Fish Fry beneficiaries from March. First up were John Brown and Jacques Gilbert representing Citizens for Apex Parks. John Brown is the directory of Parks, Recreation & Cultural Resources for the Town of Apex and Jacques Gilbert is a Captain in the Apex Police Department. Jacques spoke first and he admitted that when he first got involved with the skateboarders, he never really thought it would get to this point. But thanks to many people int the town including Lion Bekki Bennett, Lion Horace Johnson and Lion Carl Cromwell as well as the entire Apex Lions Club, the goals have been met and the Trackside Skate Plaza is almost complete and is scheduled to open this fall. John Brown had a big hand in this project as well. The mayor and town council dedicated $625K toward the project but left a challenge to the group to raise the remaining capital for the $1 Million project. There were more than 30 businesses and countless individuals who contributed cash donations and in-kind contributions to make this a reality. This truly is a community project. As it stands right now, it is about 95% complete and is the first concrete skate park in North Carolina. The grand opening is scheduled for August 1st and there will be a big party with food trucks and other festivities. Lion Chris presented them with a check for $2,000 from the proceeds of the Fish Fry. 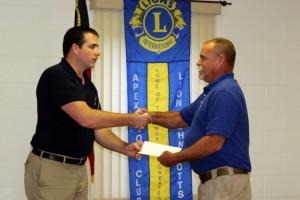 The second beneficiary was the Citizens Assisting the Police of Apex (CAPA). Richard Brooks, president, spoke to us and thanked us for all of our support. The CAPA group and the Apex Lions Club have had a mutually beneficial relationship for about four years now. We have supported them financially and they have provided man-power and volunteers for several of our events like Fish Frys and the State Fair. Earlier last year we provided $1500 to help CAPA purchase a personal ID unit which has enabled them to provide more than 1000 IDs already this year. The funds from this Fish Fry will be put towards their trailer project. The trailer will be used for many situations where the police need to be in a remote location for long periods of time. This can happen when there are traffic check points, or even at crime scenes. The trailer will provide a place a climate controlled place for the police to rest, use the restroom, or even get some refreshments if needed. The final design of the trailer is still being discussed to ensure that it will be as useful in as many situations as possible. Lion Chris presented Richard Brooks with a check for $3,000 for the trailer project. 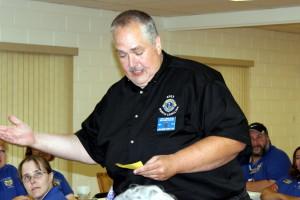 Finally, PDG Lion Wayne Faber, having recently returned from the International Lions Convention in Hawaii, gave us some updates on the happenings there. He will send me notes about that soon and this page will be updated when that happens.