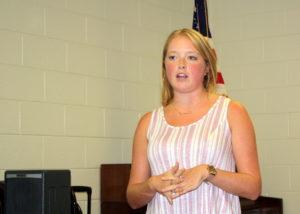 Our special guest speaker this evening was Shelby Jordan.  Shelby is the daughter of one of our newest members and the grand daughter of a long time member of our club.  Shelby shared her passion for an organization called the Starkey Hearing Foundation.  As a recent graduate of UNC Wilmington and a member of Delta Zeta Sorority while there Shelby got involved with the Starkey Hearing Foundation because the sorority had a partnership with the foundation.  Heather developed a passion for this philanthropy as well and found herself in leadership positions organizing events and doing what she could to further the cause.  The Starkey Hearing Foundation is well established having been founded over 30 years ago.  They now have presence in more than 100 countries and have delivered service to more than 1 Million people worldwide.  Their slogan is: “We bring the gift of hearing to those who live in a silent world”.  Shelby was describing some of the events that Delta Zeta has organized in recent years such as: A 5K Race which raised $7,000, Eating competitions (college students love to eat), “Get Cheesey with DZ”, “Hamburgers For Hearing”, Cornhole competitions and others.  We could not help but see the parallels between what the Starkey Hearing Foundation does for hearing and what Lions Clubs does for the Blind and Visually Impaired. 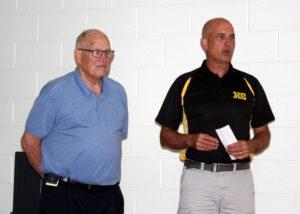 Also, as we have for many years the Apex Lions Club once again sponsored the Apex Lions Relays back in March.  This year was a bit different since it was actually held at a new location since the school is being rebuilt.  Tonight we had coach Roy Cooper present to accept the check for $1,400 which is the proceeds that came from the event.  We also want to thank the other sponsors: Bojangles, All American, Glory Days Grill, Rudy’s Pub and Grill, Edward Jones, Publix, and Kroger.  This event raises money for the track team at Apex High School.  Coach Cooper informed us of some of the improvements that will be needed due to athletes exceeding the capacity of the current facilities.  Thanks to all who participated! 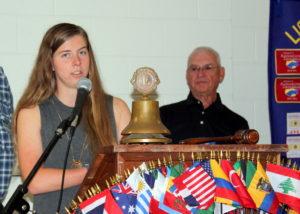 We also had the opportunity to deliver our sixth scholarship this year.  This one went to Heather Erlemann.  Heather is planning to attend UNC Chapel Hill in the fall to pursue a degree in Business.  Congratulations and best of luck Heather!